The Dumb Witnesses were at the second edition of “Bodies From The Library“, the most anticipated event in the crime fiction scene and the most loved by the Golden Age fan! A full immersion in crime fiction with a rich programme and a brainy quiz that got us all entangled! But let’s start from the beginning…

The registration was at 9.30, the badges were ready to be worn and the goodies bags full of books were ready to be plundered. Every bag contained a copy of a British Library Crime Collection book, a re-published version of “The Crime Club” by the Collins Crime and many others! The day started with a welcome by some exponents of the Detection Club (Martin Edwards, Simon Brett, Stella Duffy and Janet Laurence). After that we were quickly catapulted into the spirti of the day, with the very fist panel of the day, “The Sinking Admiral“, a new book written by some of the writers of the Detection Club.

We managed to get a copy of the book before it went sold out! This was the perfect occasion to get the book signed! Another fine piece of jewellery into The Dumb Witnesses library!

The irony and the banter during this panel were so high that at a certain point we almost stop breathing (and that’s something that happened quite a lot during the day. We also came to know that Stella Duffy will be publishing  a book based on four unpublished chapters written by Ngaio Marsh (if you were at the conference you’ll know by now how to pronunce her name correctly!

The second panel was held by Tony Medawar, in a dissertation on Anthony Berkeley (Cox, aka A.B.C. for his closest friends, we believe) followed by a very nice insight on the life and works of Josephine Tey by Jennifer Morag Henderson. This lead to a funny and hilarious debate hosted by Susan Moody and L.C. Tyler who had to candidate to a posthumous membership to the Detection Club Georgette Heyer & Phillip Macdonald (Georgette won at the end, we bet that her ghost will enjoy the three yearly dinners!)

The catalogue of published and soon-to-be-published classics of crime by the British Library.

After a quick break were we had the chance to speak with some of the writers, get book signed and actually speak with some of you, lovely readers & followers, we came back into the conference room for an insight on the work of the British Library and their M.O. (Modus operandi, but you should now it by now) with the assistance of Martin Edwards & Rob Davies. Another announcement was made, next year martin Edward will be publishing “The Story of Classic Crime in 100 Books”, promising us that there are more than 100 books listed in it!

During the lunch break we focused of course on eating, but mainly on the contest that was held during the day! In each goodies bag there was a dossier & a sheet of paper with some questions on it. We were asked to read the dossier about the murder of Robin Cox. There were various depositions and there was also a room in the conference centre which held various information and evidence regarding the case. This was a very brainy quiz that kept quite a lot of people on their toes!

Lunch time was over and we were welcomed back by Stella Duffy and how Ngaio Marsh was influenced in her books by her passion of theatre.

The bookshop allocated in the conference centre. By the end of the day the stands were almost empty!

The afternoon went on with an insight on the story of The Collins Crime Club from its beginning to its end and how it changed togheter with the world of crime fiction. This panel was held by Dr. John Curran (who is going to publish  a book regarding the Crime Club, we must not miss that!), followed by Barry Pike on H.C.Bailey and Dolores Gordon-Smith who made us cry with laughter talking about the figure of G.K. Chesterton.

The day ended with a discussion on the best adaptation (tv, cinema, theatre and so on) of a Golden Age crime novel. Many answers were expected and some have surprised most of the public (we still are not sure about Martin Edwards & Stella Duffy passion for Margareth Rutherfod’s Miss Marple). A question from the crown did turn the mind of some of the panellist on: Which was the worst adaptation ever. We don’t need to say anything because we all have in mind the same tv serie from BBC, haven’t we? 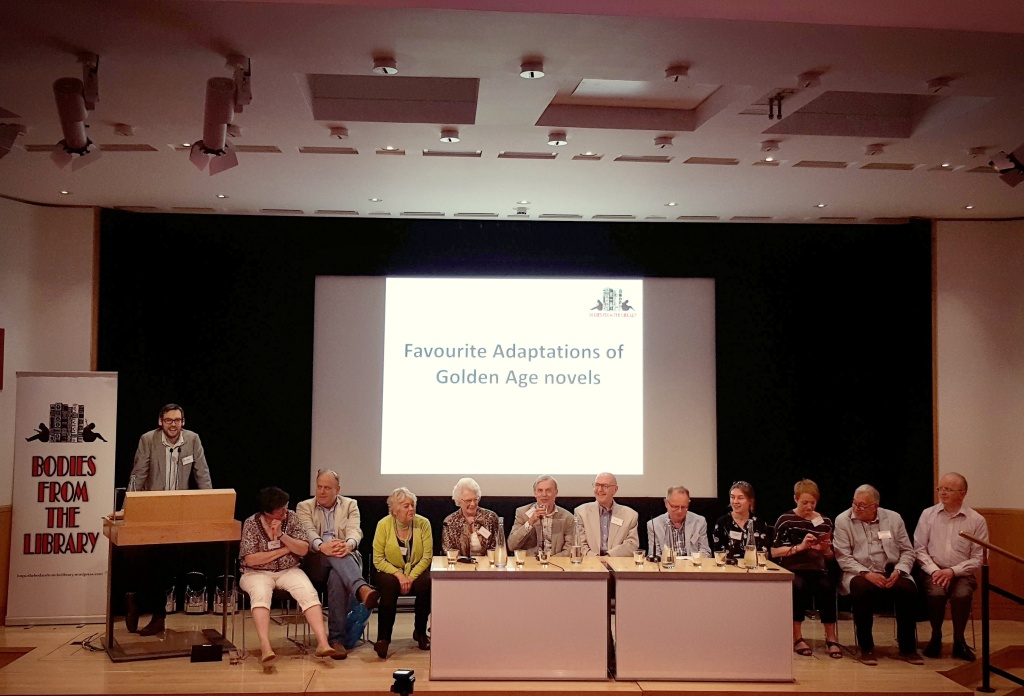 “The Last Supper” as we wanted to entitled this picture. This was by far the most comical and hilarious moment of the day by far.

But, before we left the conference centre, the announcement for the winner of the contest had to be made. David Brawn (Harper Collins UK) walked his way to the lectern, he cleared is throat and, announcing that with 19 correct points out of 20, the winner of the competition was… us! We were in awe (Marco could keep himself from screaming). We have been given a total of eight books by J. Jefferson Farjeon books and a Collins Crime Club Poster! The day could not end in a better way, full of books, memorabilia and a lot of memories we left, but we are already thinking about Bodies 2017! We would like to say thank you to the people that stopped us to have a chat and for all the compliments we received and we would like to say sorry for the ones that we didn’t manage to speak to (we saw you, but we were just to busy fan girling!) Please let us know about your experience at Bodies and please send us any pictures that you’ve got of the day (and possibly of us getting the prize, we haven’t got any!) . 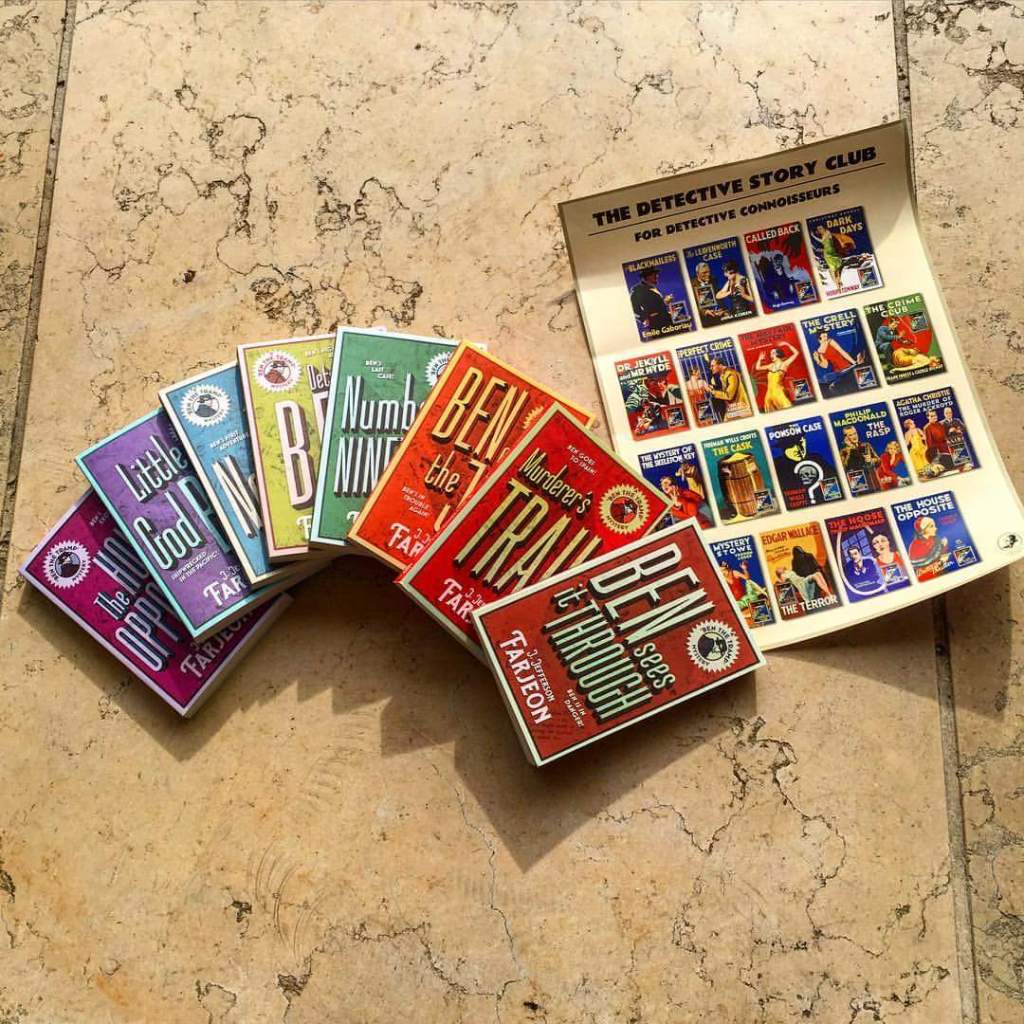 Yeah! We managed to use our little grey cells to solve the case!