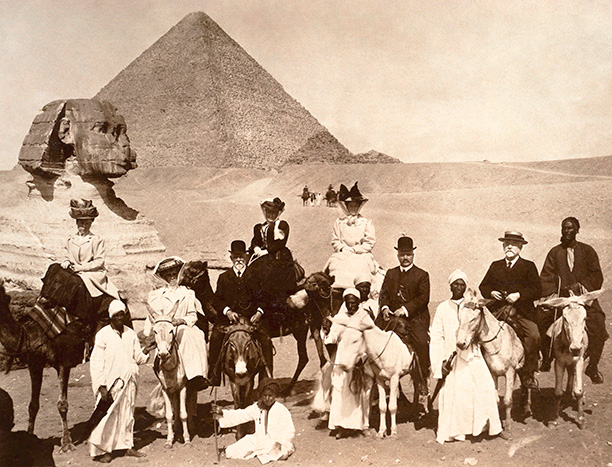 Young Agatha Miller riding a donkey in the desert. Normal activities in the British colonies

Some of you will know that Agatha Christie was greatly influenced by the Middle East thanks to her second husband Max Mallowan, whom she met during an excavation in modern Syria. But she was also very fond of Egypt, having spent her early 20s in Cairo, dancing at balls with soldiers and living the life of (as often described in her books) a “young bright thing”. Besides partying and dancing, while in Egypt she became very interested in the forgotten and almost forbidden, Pharaoh Akhenaten, husband of the well known Queen Nefertiti and father of Pharaoh Tutankhamun.

END_OF_DOCUMENT_TOKEN_TO_BE_REPLACED

1890 BC (before Christie NDR): The world is on the verge of change, Queen Victoria is still sitting on her throne and the good old days haven’t gone yet. 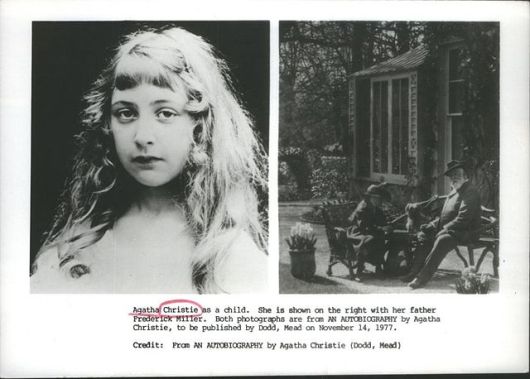 In a small resort town in Devon, Torquay, a little baby girl was born, Agatha Mary Clarissa Miller and she was destined for great things. Daughter of an American gentleman, Frederick Miller, and an English woman, Clara Boehmer, she had two siblings, Monty (who’s portrayed in the “Unexpected guest”, can you guess who he is?) and Madge, the “high brow” of the family, older than her.

Because of the age gap, Agatha grew up as a lone child. Her world was confined to Ashfield, her house where she would have always feel at home, (she always said that there were no houses like Ashfield in Torquay) and it revolved around her family, with her mother at the centre, Clarissa, a woman that influenced Agatha’s life (and her work) in many ways. Her personality was very eccentric, very peculiar and esoteric, always ready for a last minute seance, she was known for her psychic abilities and for her “Second Sight”.

The other woman that influenced Agatha was her Nannie, she was Agatha’s god, deciding and teaching the little girl about what was good and what was bad, how to approach people and how to behave like a little lady. Nannie is best described in one of Agatha’s Mary Westmacott novels (hopefully you don’t need any clarification on this) “The Giant’s Bread” where Agatha’s childhood is described with an inside on her thoughts as a little girl who was living more like an adult than a child.

Days went by between a visit in town, a stroll near the sea at Torquay’s pier, the odd trip to Europe that would have shaped Agatha’s life in the future in many ways and also a visit to her Auntie-Grannie who “always expected the worst of everyone and everything, and were, with almost frightening accuracy, usually proved right.” (she was the inspiration for Miss Marple’s character).
All was good and merry, but something was afoot, a danger coming from the depths of Agatha’s little grey cells: A gunman, ready to ruin everything and to influence her whole lifetime.

In her dreams, everything reflected her merry way of living: a tea party with family and friends, a day out on the moor, but there was always a masked man, dressed up as a French soldier with a very old musket, instilling horror in little Agatha Pagatha (how she was called by her father).
He was at first disguised as one of Agatha’s acquaintances, and then suddenly, he would transform and haunt her dreams.

She didn’t know that that man would have continued to follow her, make her a fortune and lead her to places she wouldn’t even dare to dream of…

*All images in this post belong to the Agatha Christie Archive*

Hi everyone and welcome to our new crime fiction blog! Come and join us in our celebration of the Queen of Crime, Mrs Agatha Christie.

Here you will find everything there is to know about her as a writer, as a person and the literary genius she is.